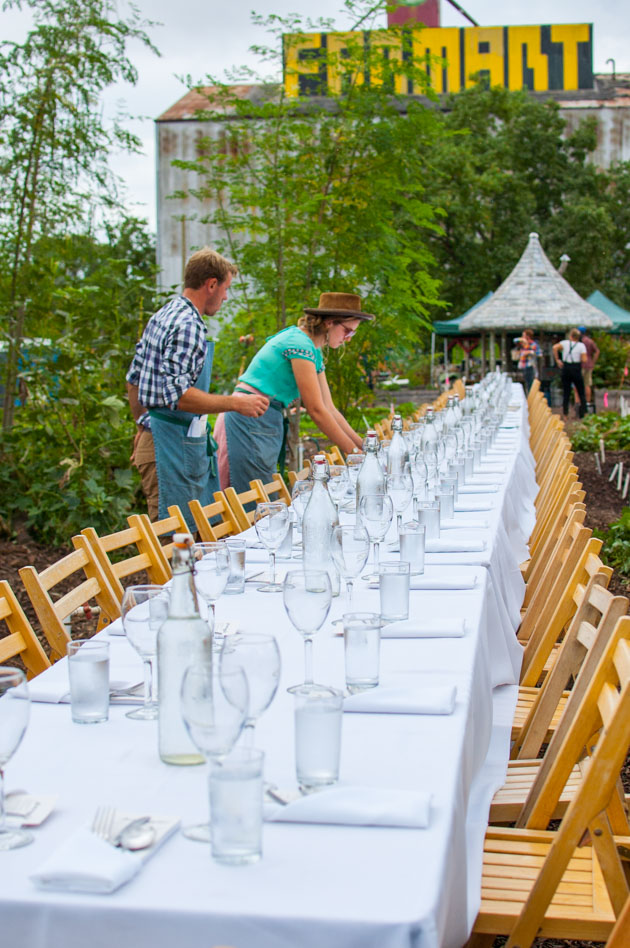 I’m going to take a break today from my standard recipe post. Don’t worry, there will still be plenty of food talk involved – there just won’t be a recipe to share at the end. Instead, I want to share with you the amazing farm dinner experience I had yesterday. The event was organized by Outstanding in the Field which was founded 15 years ago by Jim Denevan as a way to celebrate the farmer and reconnect people with the land, chefs, and everyone involved in the food community from cheese makers to wine makers.  They have organized over 600 farm dinners across the country and overseas. This is the fourth dinner I’ve attended with Outstanding in the Field. Each dinner has been unique and, I’ll say it, outstanding! The concept is to dine outdoors at a local farm. Tables are set end to end to create a visually stunning presentation of one long continuous table – Outstanding in the Field’s signature look.  The dinners are prepared by a local chef with locally sourced food. Dinner guests can visit with the chef and the farmers and get a tour of the farm. This year’s dinner was prepared by chef Justin Yu of Oxheart restaurant and hosted by Last Organic Outpost. 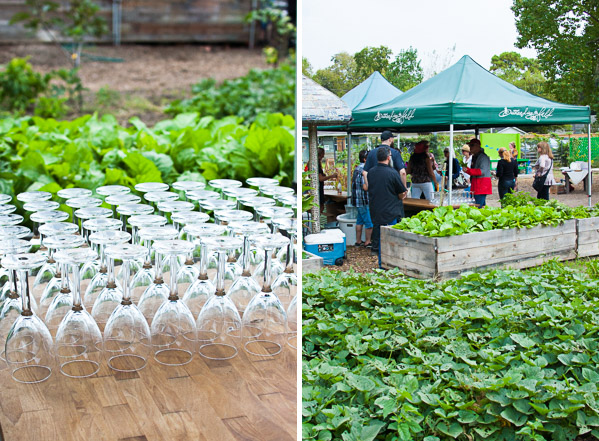 Last Organic Outpost was different from the previous dinners I had attended because it is an urban farm. This thriving community farm is located just north of downtown in the middle of a metropolitan area. 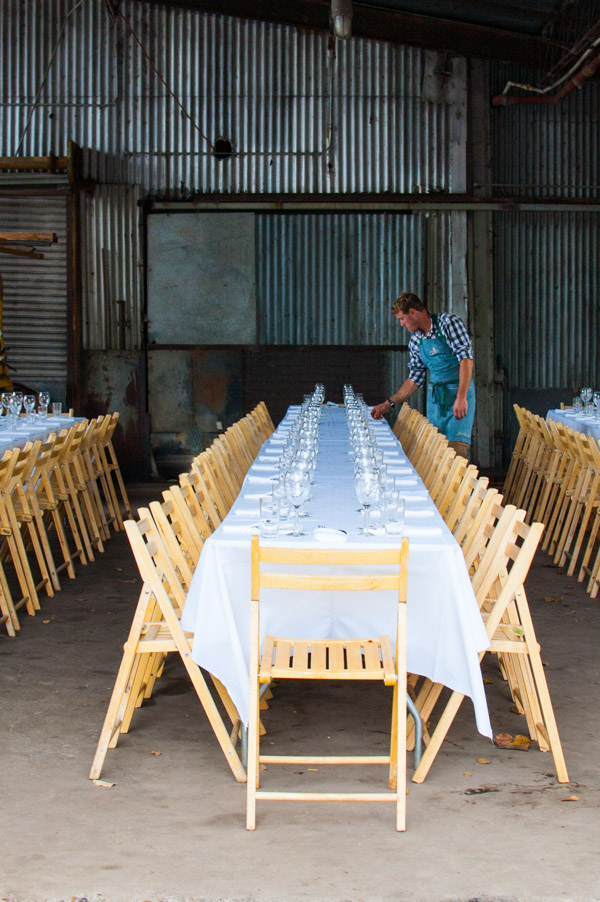 Initially, due to threat of rain,  the tables were set up in the “barn”. However, once it looked like the weather had cleared, the organizers decided it would be safe to have dinner outside. So, they (including chef Justin) picked up the tables, with glasses and place settings still on top, and moved the tables to the gardens. 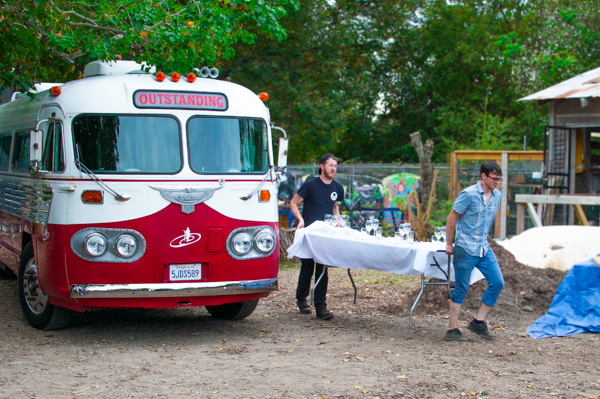 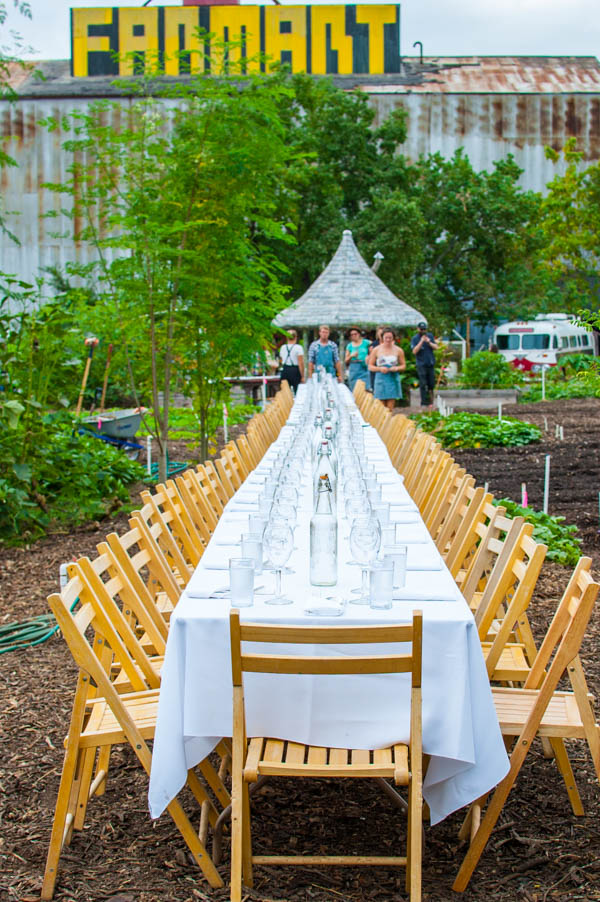 A few minutes later, the servers and staff had all the tables perfectly arranged in the gardens. As Jim said this was just part of the mobile dining experience. And they seemed fully prepared to move the tables back inside if the weather required it. Fortunately, the worst it got was a light drizzle sometime between the first and second courses. No one even cared. Everyone was more than happy to don a rain coat or share an umbrella for the very brief period of drizzle. 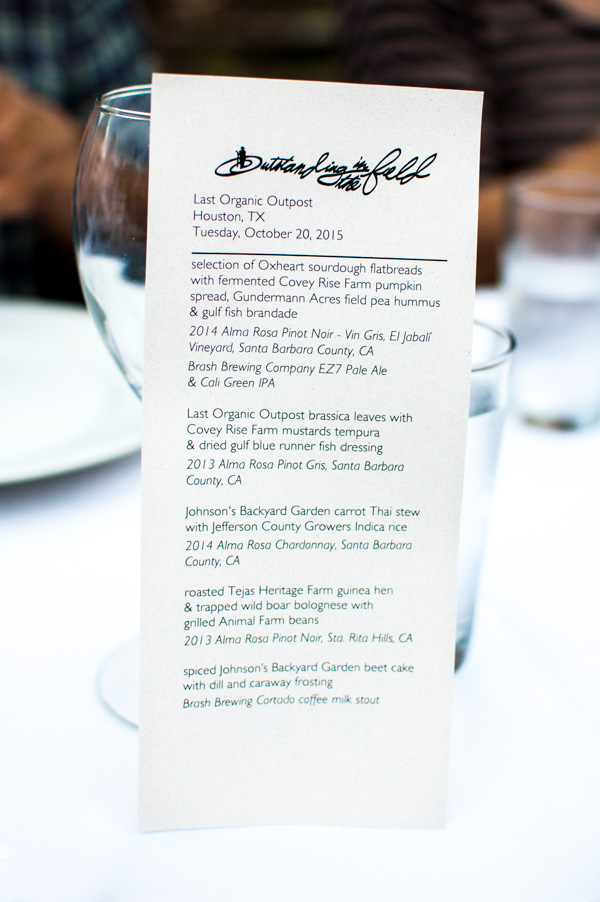 Dinner was served in five courses with a wine pairing for each course. The appetizer course was served during the cocktail hour as guests arrived and walked around. I was too distracted enjoying my wine while taking pictures of the farm and the tables that I forgot to take pictures of the appetizers. They were grilled flatbreads with three different toppings and were delicious. I tried not to be too annoying stalking the servers in hopes of getting my hands on the warm flatbreads as they came off the grill. They’re used to that sort of behavior, right? I’m going to pretend the answer is yes. 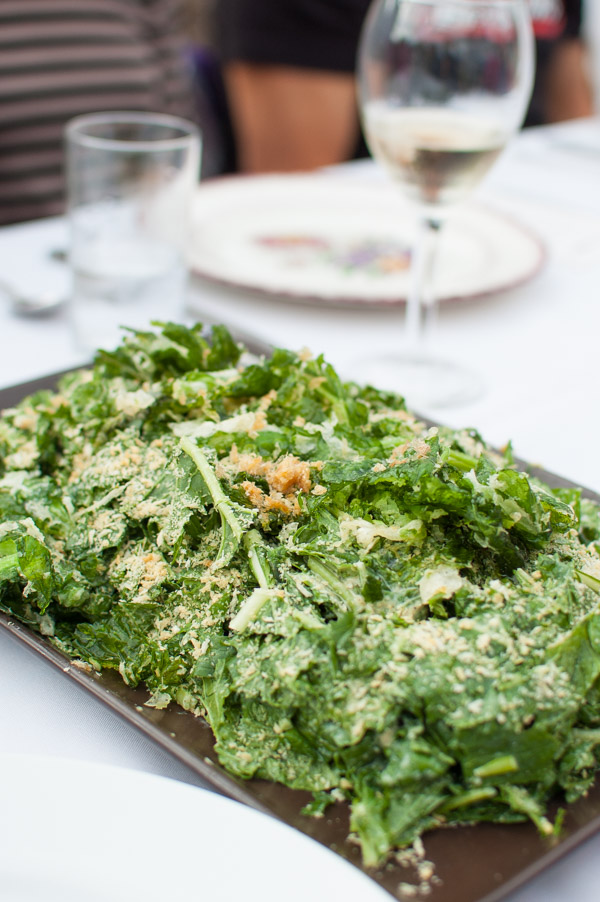 After appetizers and a tour of the farm, everyone sat down for dinner. Dinner was served family style. The servers brought out each course on a large platter which our table of eight shared. The first course was a salad made from greens that had been harvested at the farm and was topped with a dried gulf blue runner fish dressing. 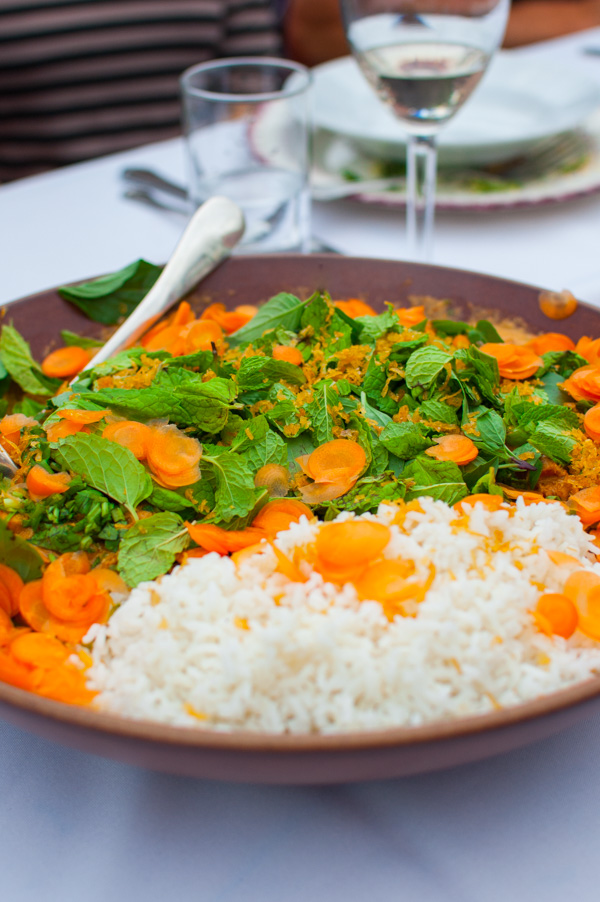 The second course, a carrot Thai stew, was probably my favorite. The curry like stew consisted of dehydrated carrots that had been re-hydrated in the stew giving them a meaty texture. It was then topped with shaved fresh carrots and lots of fresh herbs. I could have had just the stew for dinner and been perfectly satisfied. 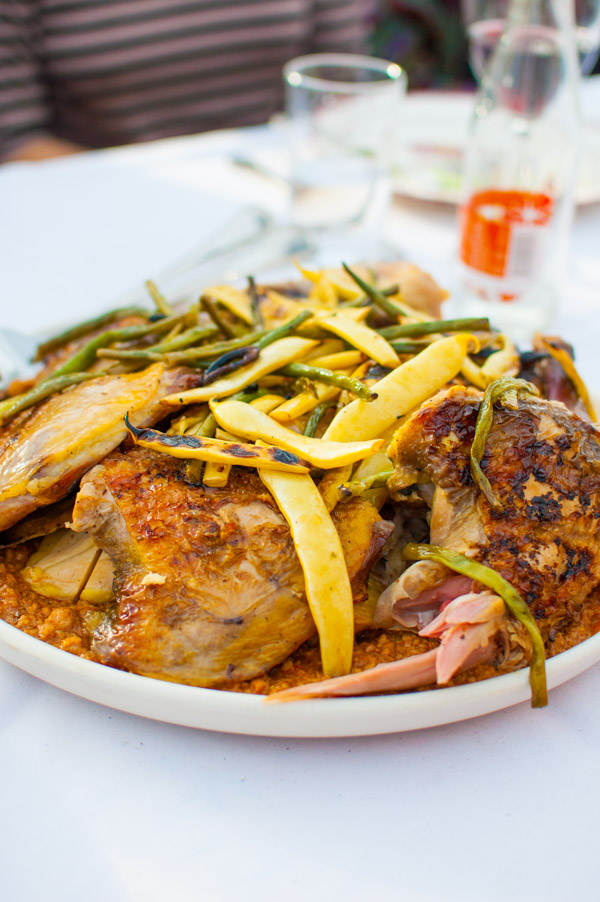 The final course before dessert was grilled guinea hen served with grilled beans and a wild boar bolognese sauce. The bolognese was amazing! Everyone at my table was wanting to eat just the sauce by the spoonful. 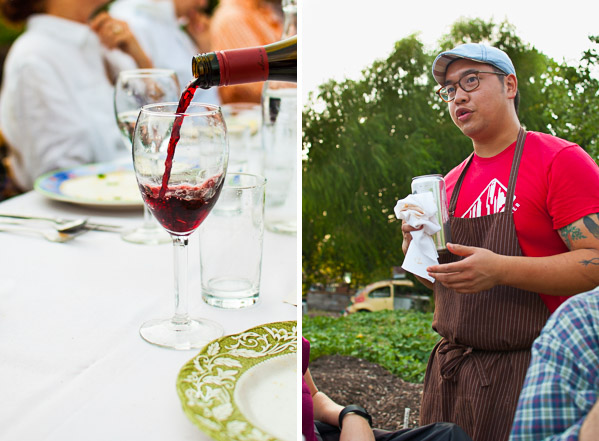 As the dinner plates were being cleared, Justin came over to visit with the dinner guests and pour some of the dessert beer. He was so gracious and such a delight to talk to. 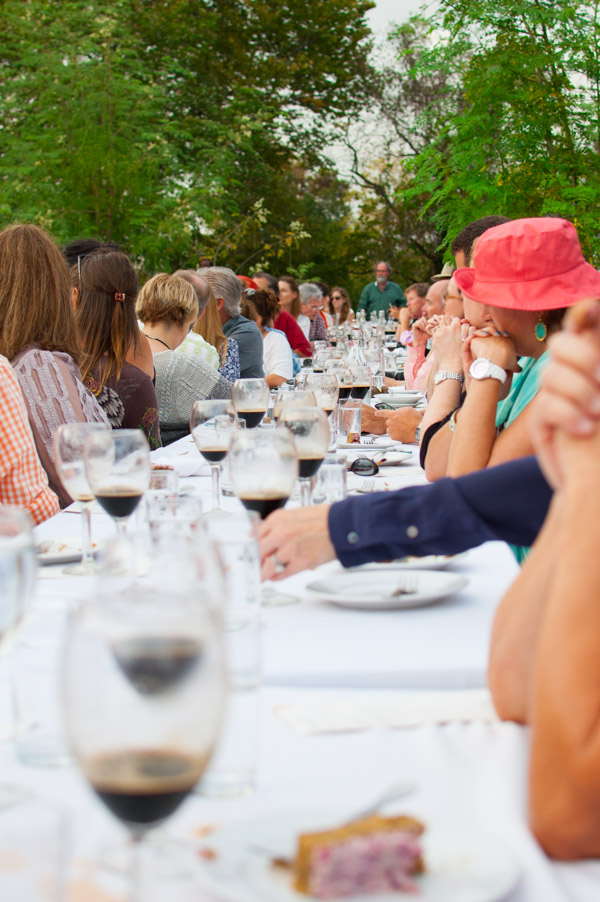 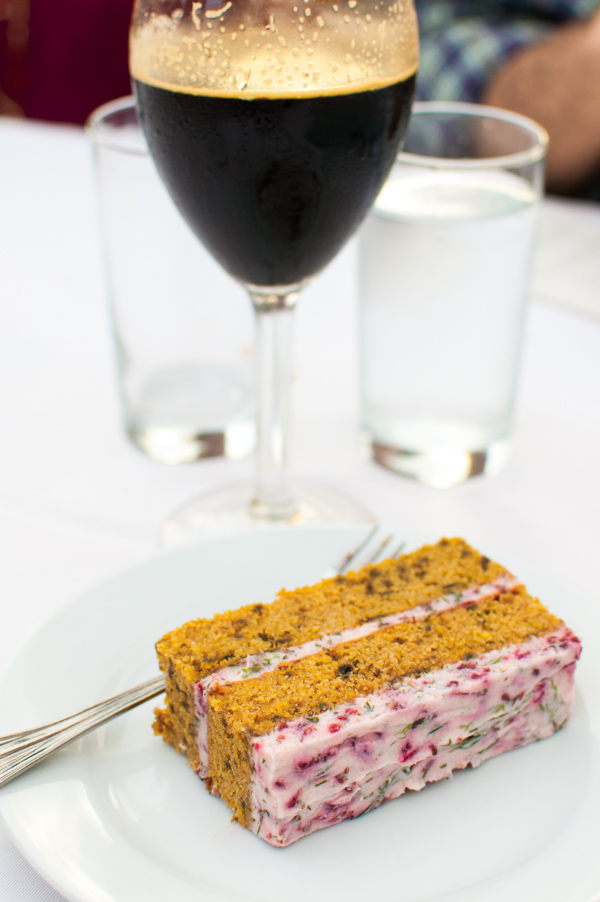 When I read on the menu that dessert was going to be a beet cake with dill and caraway frosting, I have to admit I was a little apprehensive. My first couple of bites were cautious but with each bite I found myself liking the cake more and more. Somehow all the flavors just worked together. Kudos to Justin for being daring and confident enough to put this on the menu. 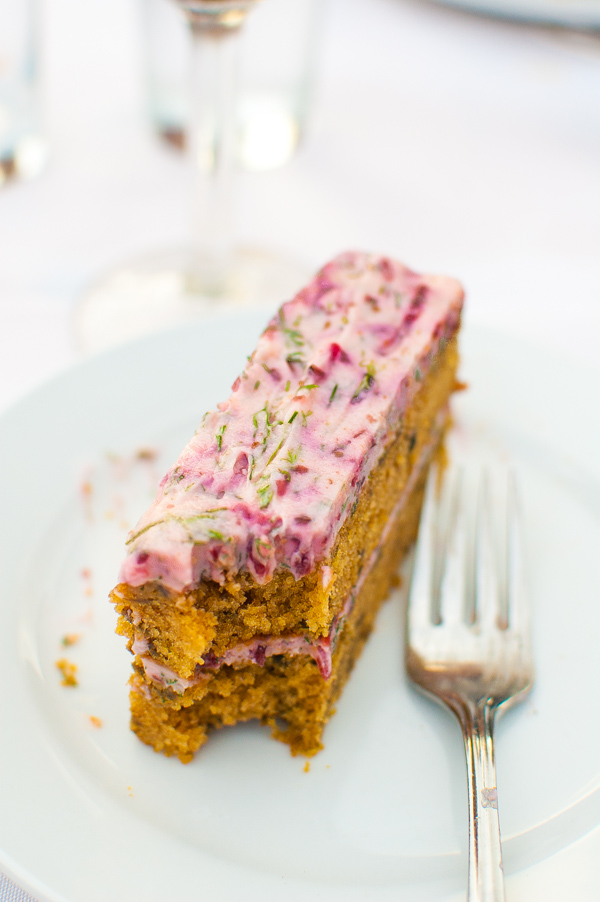 I’ve always believed that food is best when it’s a shared experience. Outstanding in the Field realizes that belief in the most enjoyable way by bringing food lovers together. I can’t wait for the next dinner.

Note: This is not a sponsored post. I was in no way compensated by Outstanding in the Field, Last Organic Outpost, or Oxheart. I bought my own ticket and created this post because I truly love attending these dinners.